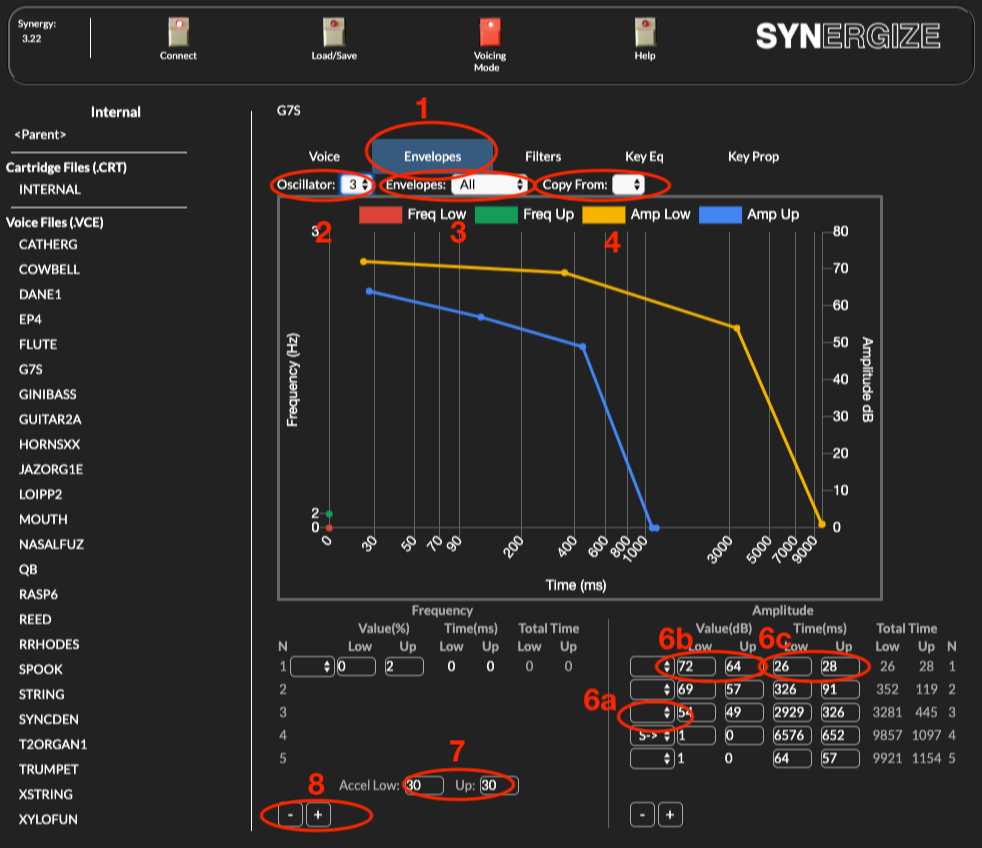 The GDS is an expressive instrument because any musical parameter can be programmed to be controlled by the VELOCITY of the keyboard.

Each oscillator is voiced twice. One set of numbers (called the LOWER BOUNDS) react: either when the CENTER/SENSITIVITY graph is at the full lower position on the display, or when the keys are played lightly (with a light touch or slow velocity).

The second set of numbers (called the UPPER BOUNDS) react when either the CENTER/SENSITIVITY graph is at the full upper position on the display, or when the keys are played with a heavy touch (or a faster velocity). When the two sets of numbers between the LOWER and UPPER BOUNDS are significantly different, positioning of the CENTER control will allow averaging or INTERPOLATION between the two sets of values. The SENSITIVITY control allows the key velocity to alter the interpolation values and give “expression”. Expressive nuance is actually the velocity control of the values of two sets of numbers.

The 16 point envelopes for each of amplitude and frequency, are independent per oscillator and per voice. However, one can “copy” one set of envelopes to other oscillators to speed up the voicing process considerably, then making slight alterations if desired.

The extensive envelope routines make it possible to duplicate the amplitude and frequency paths of fundamentals and harmonics, as does occur in the documented analysis of acoustical sounds.

The number of envelope points are used to aid in duplicating the multiple changes that take place in natural sounds. This makes the ADSR concepts of analog synthesizers outdated and impractical for certain applications, since some sounds have multiple envelope points in the attack stage alone, and different between one harmonic to the next.

There are several “TYPES of ENVELOPES”

TYPE 3 is most useful for chorusing sounds, agitated sounds and active sound effects.

It should be remembered that the Velocity can control the following parameters, assigned in the voicing process: Volume, timbre, attack time, decay time, pitch degree, pitch time, harmonic entry, speed of loops, modulation degree, speed of repeats, speed of musical tremelos, sustain lengths, a combination of these and more. As a guide to voicing, decide what you want the velocity to accomplish in a certain voice, then try to attain it.

You can copy a different oscillator’s envelopes by using the Copy From selector. This copies the values from the selected envelopes (frequency, amplitude both lower and upper bounds) to the one currently being displayed.